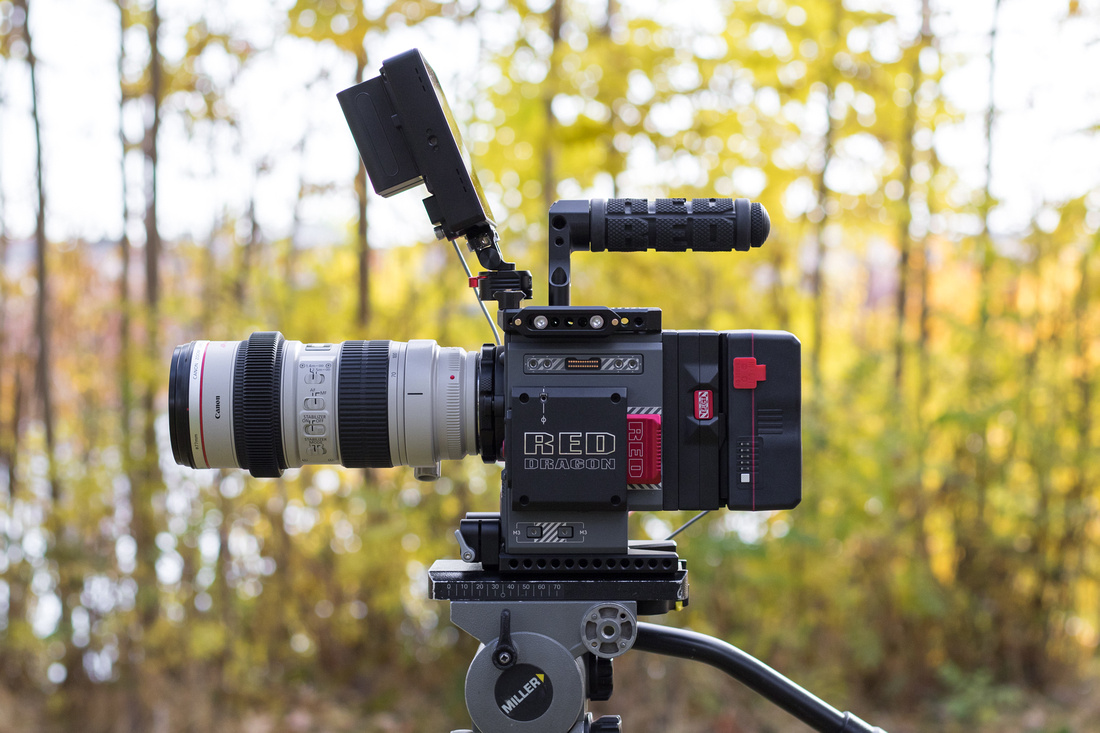 *Full Disclosure: SmallHD did not pay me in any way and I wrote this article after my experience with their products. I paid full price for my Cine 7 monitor.

SmallHD released the Cine 7 and 702 Touch line of 7" monitors earlier this year. These two monitors share some things in common but the Cine 7 has a few more features that cater to the professional. I will spare you from defining all the details as they are easy to find on SmallHD.com Originally released with an ARRI camera control option (for AMIRA and Alex Mini). Early birds would get the $500 ARRI control license included at the current price of $1799. They have now also offered this promotion to new buyers for a limited time to gain access to the RED camera control license! 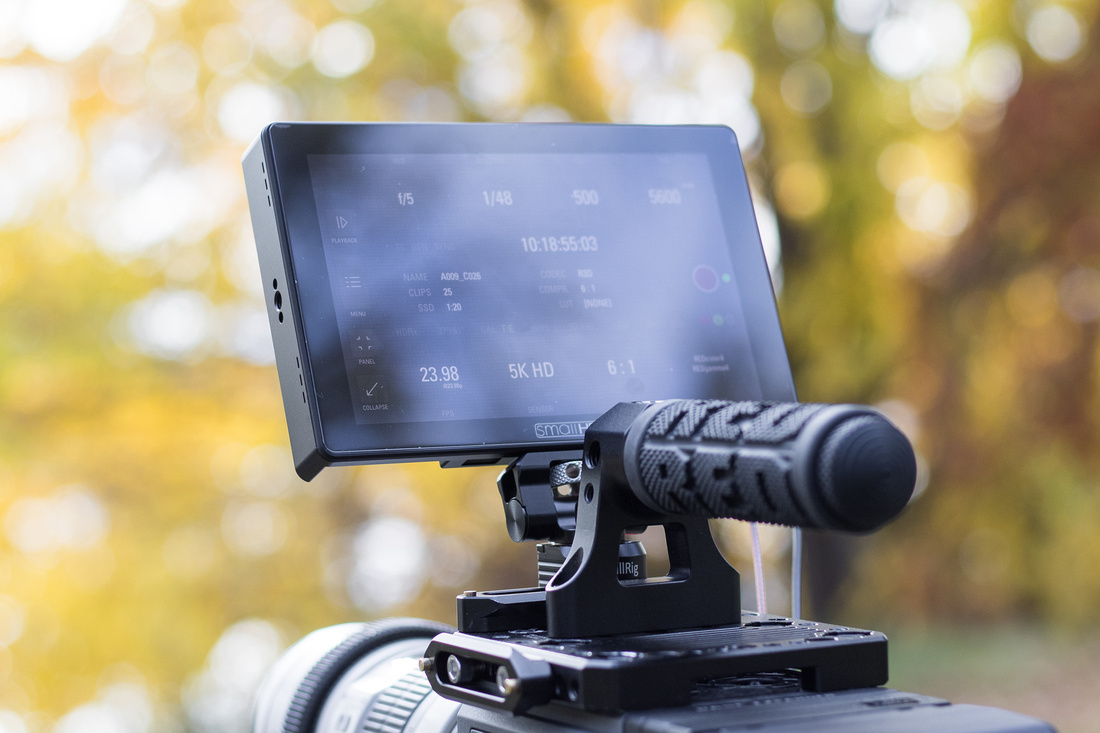 I happened to be in the market for another 7" monitor in early August 2019 and was weighing out my options. RED has recently released the tool free version of their new Ultra-Brite 7.0" touch LCD display. With 2200 nits of brightness, surely it would be great for those outdoor days filming on my Scarlet W. The tool free pogo connection is also handy. However, for now its hard for me to justify the price. So I looked at a few alternatives and the only one that really met my needs was the Cine 7. It was 1800 nits and built with a durable milled aluminum housing, 2x 3G BNC /2x HDMI in/out with power to PTAP/DTAP and a Sony NPF, Gold Mount or V-Mount adapter plates. Coming from using a lot of monitors with tactile keys, I felt like that would be the only thing I would have to give up. So I ordered it. 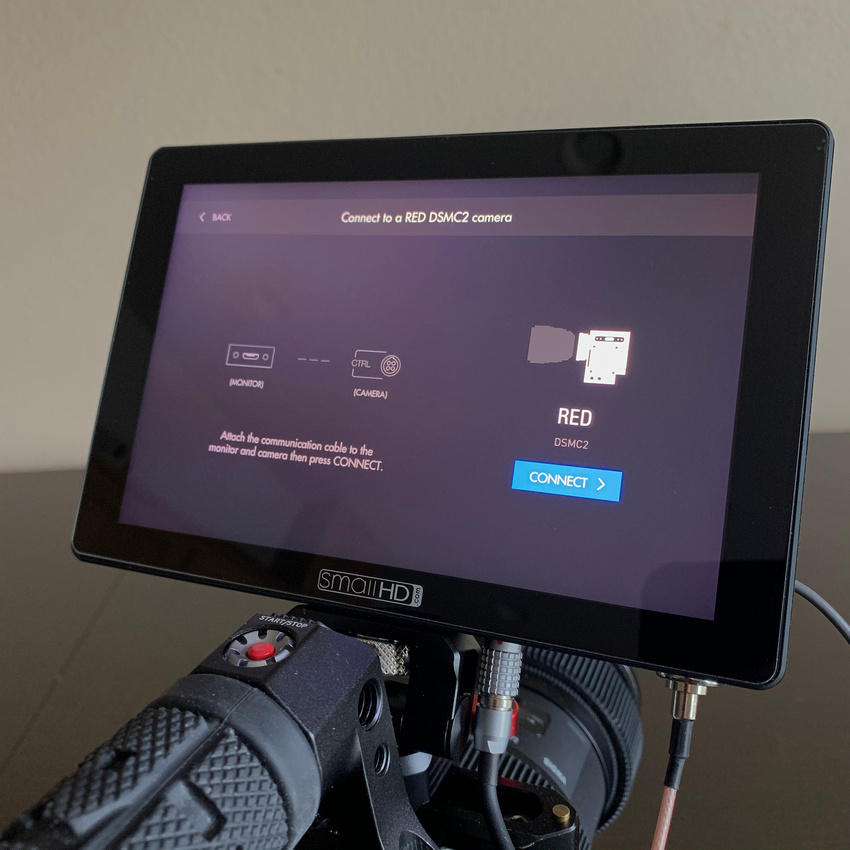 First impressions have been very good. I have done several tests with it using my RED Scarlet W and also used with my SONY FS700. SmallHD was kind enough to let me in on the final part of their BETA test for the RED DSMC2 control firmware. There were only a few bugs that I personally noticed but they worked those out rather quickly and launched it earlier today. The menu system for Camera Control is available for ARRI, RED DSMC2 and for SONY in the near future. The interface is very straight forward and easy to use. For RED, all the menus settings and functions are accessible. Below I will list a few of the pros and cons that I can think of with going this route versus buying a new RED touch 7" ultra-brite display.

So far it has been a great monitor that is meeting most all my needs. If I don't power it with the Sony battery plate I can power it off of the DTAP on my vmount. Doing so adds a 3rd cable so that's another downside but it works. The other possible problem while using this for RED camera control is that you tie up the CTRL port. So if you generally use that for controlling follow focus motors etc, you will have to make a choice. Currently there is no solution for this unless there is a 3rd party module or top plate out there with added ctrl ports. im just not familiar if there is or not currently. 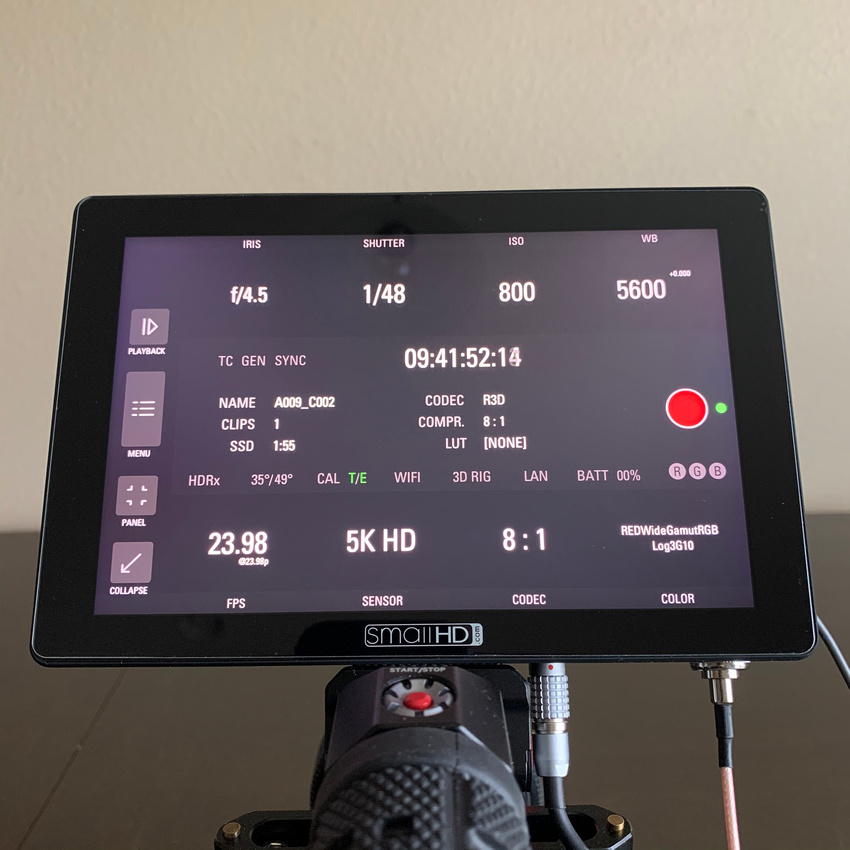 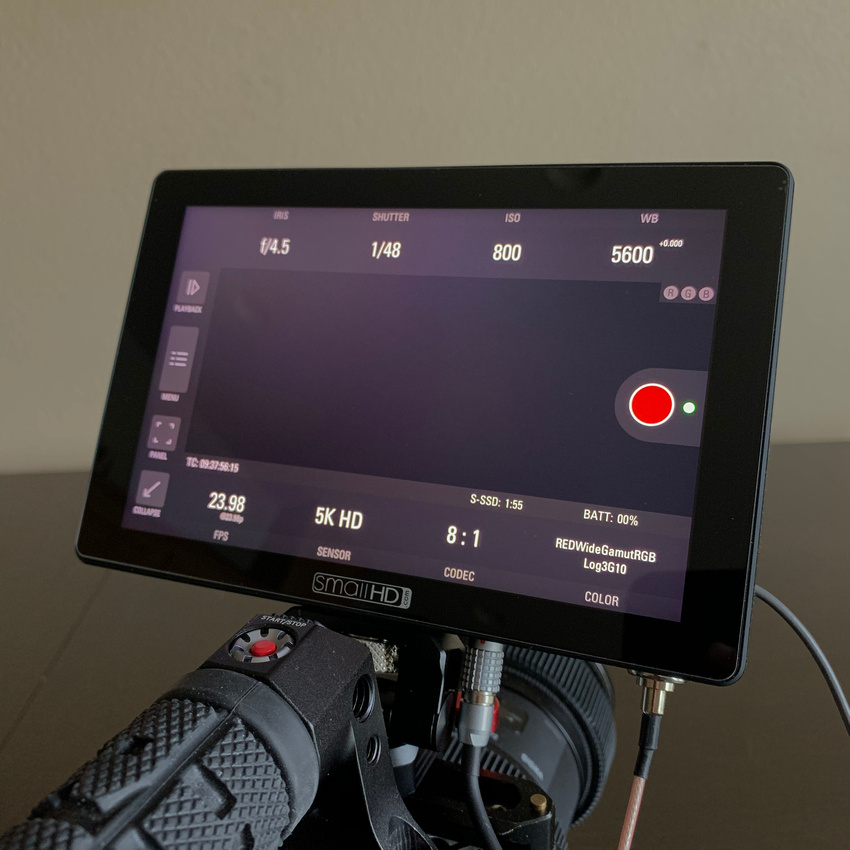 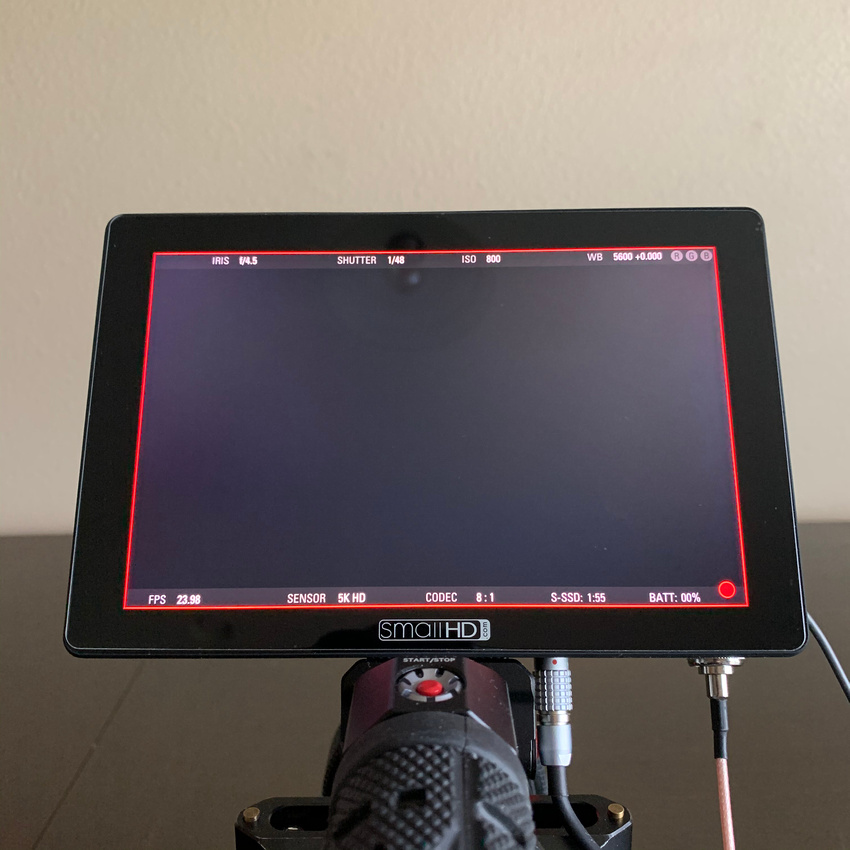 GEAR DISCUSSED IN THIS ARTICLE: 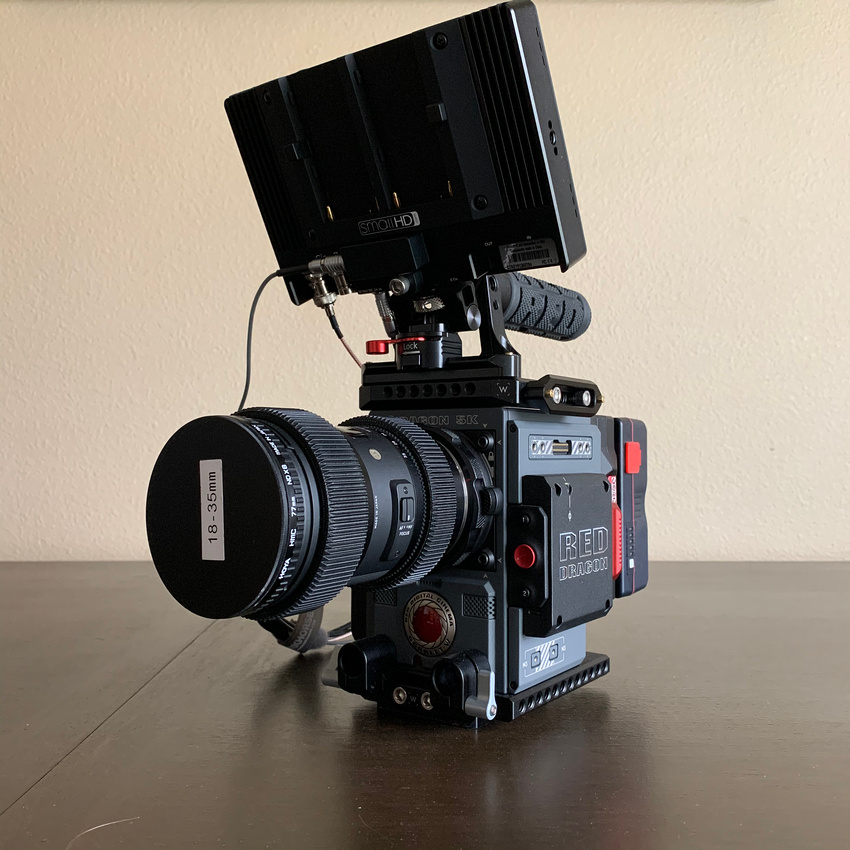 The solution that works pretty well is by using a Small Rig Field Monitor Mount w/ Nato Quick Release 2347. This particular monitor mount has a NATO quick release on one end. On the other end is a knurled dial with 1/4-20 thread integrated into a tilt mount. This tilt mount also swivels 360 degrees. So by using this with a NATO rail you can easily mount your monitor or take off your monitor. I personally love the nato rails and any accessories I can utilize with them. They are so solid and quick. This mount is affordable and it also is rigid enough to support this monitor with or without Sony batteries on the back. This mount has a v mount/gold mount battery plate option but I don't see this mount supporting the large heavy batteries. If you want to mount the monitor close to the body by using this by using this mount it works great. The other things I've noticed that isn't the best is since there's only a single 1/4-20 and no detents or anything you can turn the monitor accidentally on that single screw mounting point. Its easy to tighten down snug but it still can happen. 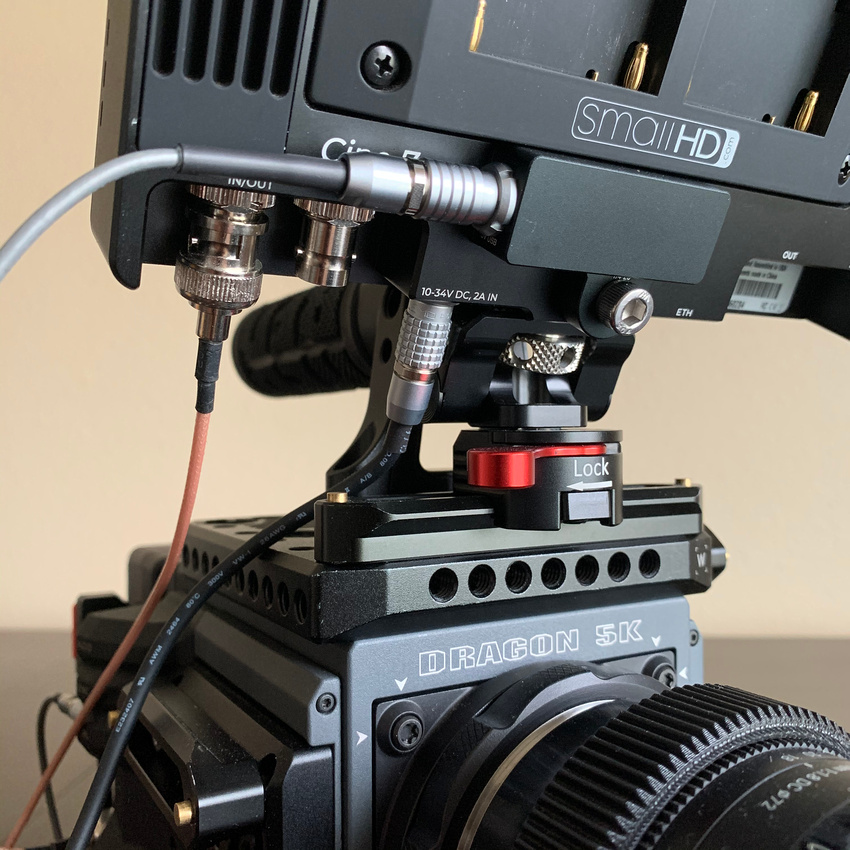 My other favorite monitor mount right now is the Wooden Camera Ultra Arm. It is a very versatile mount.

This site uses affiliate programs for some of the links within. Affiliate programs with Amazon.com and other 3rd party providers help me make a small profit from link thru sales. You get a great price and hopefully my advance helped you make an educated buying decision. Thank you for using my links.